One Page At A Time Interview...Jason Franks, part 1

Jason Franks is a writer, artist, editor and publisher. He has co-created The Sixsmiths, currently available from Slave Labor Graphics...He runs Blackglass Press, which has recently published his McBlack graphic novel and the Kagemono anthologies, and he is a frequent contributor to both prose and comics anthologies. In other words...he's a busy guy! 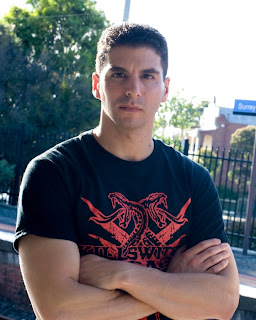 DC: Did you start reading comics as a kid or was your introduction to the medium later on? Were there any influential creators or stories (either in comics or prose) that made an impression on your young brain?

JF: I had some comics, as a kid, and I loved them, but I wasn't an avid reader of the medium. I had two Spider-Man issues, a Batman, and a Frank Miller issue of Daredevil (I had no idea who he was, but it was my favourite). I had a big pile of Archie digests that a cousin gave me...a dozen or so issues of Mad Magazine. Comics were an occasional treat, but I was a voracious reader of prose, particularly science fiction. I started on Enid Blyton, Captain WE Johns and Lesley Charteris, and before I was finished Primary School I'd discovered Ursula Le Guin, Roger Zelazny, Frank Herbert, Isaac Asimov, David Brin, Robert Heinlein and Ian Fleming. Le Guin and Zelazny have, in particular, been huge influences. I've reread their major works at several different junctures in my life and I take away something new from them.

I discovered comics late in high school. The appallingly-talented Gregory McKay gave me a Sandman issue to read and I was hooked. That was really my first serious introduction to the medium and for a long time the bulk of my reading came from DC's Vertigo imprint. Sandman was a favourite, quickly joined by Garth Ennis' Hellblazer. When Warren Ellis took over Hellstorm at Marvel, with Leonardo Manco drawing, it was a revelation: it looked and read like something I might have created, if I had the chops. Then Garth started up Preacher and it was all over for me. I was hooked.

DC: I feel the same way about Preacher. I was (and still am) tremendously influenced by the character development and storytelling techniques that Ennis and Dillon used. In particular, I'm fascinated by the non-linear nature of the story (taking a "pause" from the main narrative to flash back in the lives of the key players). I find it to be a beautiful device when it's used well. Whether it's conscious or not, I find those techniques seeping into my work. In your previous answer, you make mention of some iconic storytellers as influences. How does the work of your literary heroes affect and influence your writing, whether it's prose or comics? And...do you think you're conscious of it, or is it something you recognize later on as you're looking back at the work?

JF: I took specific things from all of my old heroes, absolutely.

Zelazny was a big part of my love of cross-genre storytelling, as well as his taste for protagonists who throw out the script.

LeGuin's Earthsea stories disturbed me profoundly. They wear the trappings of quest fantasy, but the quests themselves are a lot more philosophically complex than you see elsewhere in the genre--even considering that these books were written for children. Le Guin's books have this grimly Taoist outlook which I have spent many years trying to unpack in my own work.

Garth Ennis' ear for dialogue made me really attend to that aspect of writing, along with Quentin Tarantino's movies and Elmore Leonard's novels. Even so, I think people underestimate Garth: even when he's phoning it in, his stories are flawless paced for drama, action and particularly comedy, and I can't think of any other comics writer I could say that about. Pick up any given Garth Ennis book and it's a lesson on clear, effective storytelling.

The books I read when I was younger have permeated my writing to the point where I am not always conscious of the influence--often it's not until I reread something that I can see it how it effected me. "Bloody hell, so that's where I got that from!" It's humbling.

DC: So, when did you know you wanted to be a creator, and what were the first steps you took to set you on the path?

JF: I've wanted to be a writer since I was about six years old. Writing fiction is something I've done for pleasure as long as I've been able to read. I started to really take it serious when I was at University--by which I mean, I started submitting stories to magazines. I sold my first one in 2001. I was always interested in comics, but I wasn't serious about it the way I was with prose. I messed around with the medium a bit, drawing as well as writing, but it wasn't until 2003, when I gave a script to another artist to draw, that it seemed a viable option. I had the basics of good storytelling down, but having to communicate the story to an artist took some work. That first story was bloody difficult, in point of fact. But it paid off: I was bowled over by the pages that came back from the artist, and I got so much good feedback for the story that I started writing more comics, looking for more artists. The bigger my portfolio got the easier it got to find collaborators... and here we are today.

DC: In addition to being a writer, you're also an artist. How do you distinguish between a story that you're writing for yourself to illustrate versus one that's for another artist? Is it based on the length of the project or the subject matter?

JF: I don't think of myself as an artist. I'm a writer first and foremost. I enjoy drawing, but my abilities are quite limited. When all is said and done, I'd rather have my stories drawn by someone awesome than by someone mediocre. I write every day, but I can easily go for months without drawing a page.

I do try to tailor scripts to the artists, if I know who the artist is before I start writing. If I'm writing for myself, my scripts tend to be quite sparse. Working out how to tell the story is exciting and I have to save some of that for the drawing table if I have to take the piece to pencil. This causes me a lot of problems, too--a loose script is easier to wander away from, especially if the going is tough. I try to write stories that I think I will enjoy drawing, but more often than not it feels as if my reach exceeds my grasp.

DC: So, focusing then on scripts that you write for other artists...do you have a typical process that you use for getting to the finished product? For example, do you do a detailed outline first or do you thumbnail the whole thing before moving on to a first draft? Or is it one of those situations where the process may change depending on the story?

JF: It varies a lot, depending on how well I know the artist and how I am approaching a particular story. Sometimes I have page-by-page breakdowns, sometimes I start on page one and work through to the end. Sometimes I write the dialogue like playscript or screenplay and then rejig it into comics, if it's heavy on dialogue or action. I don't always write every scene in the order it will appear in the book.

Often I want to write my way into the characters. For a longer work I'll usually write a dozen pages of script before I'll go to a detailed outline. That said, I usually know how a story will end before I start. Sometimes I have to work my way back to the beginning. I like to have room to improvise on the page.

DC: Interesting point about "writing your way into characters". Is it fair to say that in general, you start with character (instead of starting with plot)?

JF: Generally, yeah, although my characters are often ciphers when I start out. Most of my stories have protagonists who are antiheroes, villains or even monsters, and for me storytelling is very much a process of problem solving. I often know the end of a story before I know the beginning, and a good ending hinges on a particular action. Then I work it backwards--why would somebody behave that way? What kind of person would come to that conclusion? Sometimes it's not until I start putting words in characters' mouths, let them walk around a bit, that I get a good feel for them.

Characters do, quite often, surprise me. There have been several occasions where I didn't figure a character out until after I'd finished the story. Looking back, I'd see a sense in it that I was not aware of as I was writing the story. I know that sounds like a bunch of pretentious writer-bullshit, but it's also true. There is something decidedly schizophrenic about writing fiction, when it's going well.

DC: Is your process any different for short stories versus longer ones? And while we're on the subject...what makes a good short story? Just by its nature, it seems a lot more difficult to focus on character development, mood, atmosphere and such when you've got limited space.

JF: Short stories are really difficult--I think that's why I love them so much. You have to cut brutally to make a short story work in the space constraints, there's no room for showing off. You have to start every scene as late as you can and cut away from it as early as possible. You have to impart just enough information to tell the story in a way that's satisfying.

Structure is key: you're probably not going to get a 3 act story into 6 pages, so you need to work out how to make everything work despite it. You want an action scene? That chews up a lot of space. Action sequences mean that you have to cut even harder. You need to establish character and mood quickly and economically while you tell the story, using whatever means necessary.

Every story is about conflict, on one level or another. Be clear on what that conflict is when you start writing and use it to keep yourself focused as you execute the story. The nature of this conflict may not be apparent as the story progresses, but it should be by the time the story is over. 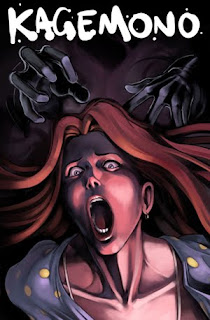 DC: Sticking with the topic of short stories...you've edited several collections of short stories (Kagemono). Do you have an editorial "style"? And relatedly, in your opinion, what makes a good editor?

JF: Aside from the prerogative of choosing stories that I like, I don't have an editorial 'style'--I think style is something that should be left up to the writer. An editor should be an enabler, not a co-author. I try to fit my level of involvement to individual creators' processes without interfering too much. If a writer needs help cutting a story back, tightening dialog or resolving certain plot points then I'll work with them on that as best I can, but I don't want to be the kind of editor who rewrites other people's work.

If I get a story that needs a lot of rewriting I will either reject it or, if it has potential, I'll ask for another draft based on some broad observations. The most frequent problems I see are writers asking for too many panels or cramming in too much dialogue.

Come back next week for the conclusion of Jason's interview. In the meantime, check out the website for Blackglass Press right here: http://www.blackglasspress.com/
Posted by Dino at 10:55 PM