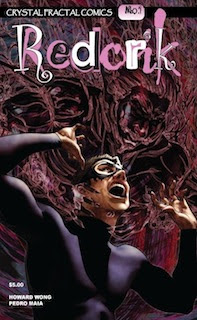 While we've been hard at work pushing our Indiegogo campaign to complete our  Redorik series, our efforts have popped up on a couple of blogs.

Redorik series writer Howard Wong recently mentioned the series and our campaign on his blog, where he said:

"The story I was crafting would see the traditional new superhero tale get hit by a bazooka! Saving the day will have a whole new meaning. Duo identities will be rewritten."

Howard made note of how we had to literally pause publication of the series really because the economics of indie comics didn't really allow for Derrek and I to move forward with four simultaneously running series. Thankfully with great, indie-friendly projects like Kickstarter and Indiegogo we've got a second chance to "press play" on publishing our story, one that Howard is really passionate about and believes in. I feel the same way, and as with any sort of creative work, passion and belief in what you're doing is the only thing that really matters. It's the reason Derrek created this story, it's the reason Howard mapped out its plot and it's the reason I'm willing to be relentless on this campaign. We all care about Redorik. 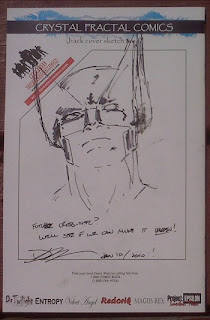 I think that's been recognized, at least in one corner of the online universe. 'They Stand on Guard!" which is a Canadian-based blog focusing on Canadian superheroes and comics, recently posted a link to our campaign page in one of their posts. The blogger spoke highly of our $10 perk which gets you any single printed copy of one of our books, which will be signed by as many creators as possible while also sporting a special sketch on our trademarked outside back cover sketch area. We do have some examples in our Indiegogo gallery page of past sketches drawn by Kieron O'Gorman, Jae Korim and Sam Agro. The sketches aren't limited to Crystal Fractal Comics characters though, as we can even arrange to have anything you like sketched on the back cover. We've even had someone request Wolverine in the past.

If you like what you've seen and want to help out, no donation is too small. While we do have perks set as benchmarks, you can actually donate something as low as $1US. All you need to do is sign up at Indiegogo, go to the contribute page and scroll down to the bottom where you'll find an option to contribute any dollar amount you like. No matter the size of the donation, we won't forget you and you'll be listed on our contributors list along with the book's credits.

If you have any questions on the campaign, you can get in touch with me by email at aardizzi@crystalfractals.com, through Twitter via the Crystal Fractal Comics account or by simply commenting here. I'll try and be as quick as possible with any responses, and remember, if you want to support our books, please visit our Indiegogo campaign page and help us complete Redorik in anyway you can.

Thanks for all the support!